I could use some help here to integrate Admob for the iOS version of my game. I have no flipping idea of iOS native programming. My libGDX game was written with Android in mind, nonetheless I have successfully build it for iOS with MOE. Everything is working. Well, everything except Admob that’s my main income source so I really need to set it up.

I have seen some posts here about this matter, but none that have helped me. There’s one code example someone published, but it won’t even build because there’s a call to a constructor with different parameters than the constructor declaration itself, so I don’t think is too reliable.

I think it someone could just give me a comprehensive list of steps I should follow and/or concrete things that I must research, I could do my own way from there.

Thanks a lot in advance,

Thanks a million for your prompt answer.

Again, thanks a lot.

Ok, I see, I need the cocoapods, but I don’t seem to find a pod file in my project, so I’m going to make it with the zip file downloaded by hand instead.

Ok, wait
Sorry but when i answered you I was with my phone, so i couldn’t be very accurate
Since you prefer the direct download of the framework, i’ll give you a more detailed version of the steps:

P.S. : To see how to implement ads, you can easily understand how following the official google ads guide for iOS, and remember to update moe plugin to 1.4.4 (inside build.gradle)

I shouldn’t have forgotten anything, but if u get any error, just show me

Where’s that “Generate Bind” I must click on at the end of step three?

This is where I’m right now: 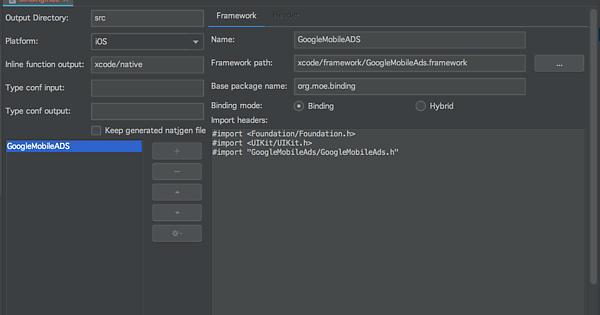 Below “Keep generated Natjgen files” (above the + and the - ;near the “GoogleMobileAds” text) there’s a “steam wheel”, if you click on it, the “generate binding” option pops up

Oh! I see now… thanks for the clarification! I shouldn’t code without wearing my glasses…

I’ve double checked that the framework files are there. I have even selected them directly with the three dots button, so they are there, that’s for sure.

EDIT: I solved this particular issue thanks to the last message in this post:

I am also running into this issue. Additionally and possibly related, the ios run/debug configurations show a “no simulator device available” message. The “multi-os engine actions -> open project in xcode” context menu option works fine. Have tried uninstalling and re-installing the multi-os engine plugin, I’m at a loss as to how to proceed. MacOS 10.12.6 Android Studio 2.3.3 XCode 8.3.3

Now I’m getting this same error twice during binding generation:

I am using MOE 1.4.2 with iOS 12. when I create Binding, I have some error like below. /Applications/Xcode.app/Contents/Developer/Platforms/iPhoneOS.platform/Developer/SDKs/iPhoneOS.sdk/System/Library/Frameworks/OpenGLES.framework/Headers/EAGLDrawable.h:52:12: error: attributes may not be specified on a category. When I do this for iOS 11, I can bind. How can I bind in iOS 12?

There’s a guy in that thread that seems to have it working just ignoring these. I’ll give it a try and see what happens.

I’m getting the following errors when trying to run it in the emulator, but I think it’s proguard related:

/Users/rolandvigh/public-repo/moe/natj/natj/src/main/native/natj/ObjCRuntime.mm:1478 WARNING: Binding class refers to class GADBannerView, but it can not be found. Fallback to indirect super class.
/Users/rolandvigh/public-repo/moe/natj/natj/src/main/native/natj/NatJ.cpp:1650 FAILURE: C variable not found for method kGADAdSizeFullBanner in class org.moe.binding.googlemobileads.c.GoogleMobileAds!

I’ll update this as soon as I have solved it.

I can’t get over that error. Is there anyway to examine the oat file or something like that to make sure that it’s including everything it needs?

Any other idea to debug this problem would be more than welcome.

Tried adding -ObjC to the linker parameters, then I got this different problem, that I don’t know if it’s an improvement or the opposite…

Honestly, this is quite frustrating. I’m gonna give MobiDevelop a chance. I think it cannot be worse.

I can’t really help you with that, using Pods doesn’t give this error, idk why u get it
I don’t recommend using mobidevelop since it’s abbandoned
But yeah, might worth giving it a try

I may give a try with the pods then. Anyway, Mobidevelop is NOT abandoned as far as I know, in fact it’s been updated less than a month ago:

It is a fork of RoboVM, which is the one that was abandoned.

I didn’t know
Good luck and let me know, please